For the latest models of Mini Cooper sales  started in early 2014 and was a larger car in all dimensions than the outgoing model.  Available with a 6-speed manual or a 8-speed automatic gearbox.

At launch the engines available were as follows:

These are incarnations of the BMW B38 engine featuring direct injection, variable valve timing and a turbocharger.  These engines also appear in a number of BMW models.

This is the BMW B48 engine used here in the Cooper S model but also found in many mainstream BMW models.

For the Cooper SD this is the ubiquitous B47 BMW engine found in millions of BMWs including the 1, 2,3,4 and 5 series models to name a few.

Just in case you are wondering what TwinPower is….   This is can be confusing because BMW have pioneered engines with two turbos and sometimes three for some time now.  If you see the words TwinPower Turbo on your engine this does not mean you have two turbos – its a single turbo known as a ‘twin scroll’ turbocharger.

‘Normal’ turbos take use the exhaust gasses to power a fan that in turn drives a second fan to suck air into the engine.  The TwinPower Turbo (also called twin scroll turbo) is a single turbo powered from pairs of cylinders in an alternating sequence from two exhaust down tubes which gives a smoother power delivery. 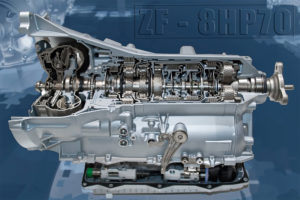 For the first time you can have an the ZF 8 speed automatic gearbox in your MINI.  Auto boxes have come a long way in recent years and this one is perhaps the best there is – and found in many luxury cars from Alfa Romeo to Rolls Royce to Volkswagen.

Most automatic gearboxes use an oil bath (or fluid coupling) to transmit power.  This means that historically auto ‘boxes have been less economical as well as slower than their manual counterparts.  This is where this ZF unit scores;  with faster shift times and more ratio, cars fitted with this gearbox accelerate faster and are more economical than their manual equivalents (on paper at least).

One might think that 8 ratios are too many and unwieldy – but in practice you simply select ‘drive’ and let the gearbox do the work.  The fact is you never really know what gear you are in and frankly it doesn’t matter. 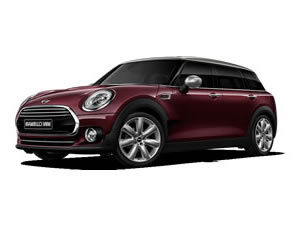 The latest Clubman is based on BMW’s UKL2 platform (shared with the BMW 2 Series, BMW X1 and BMW X2) and is a ‘proper’ sized family car capable of hauling your kid to University with all that they (and some of what you) own.

All engines are turbocharged and perhaps the best engine / gearbox combination is the 2 litre diesel with the excellent 8 speed auto found in many other BMW models.  In this guise the car is superbly quiet, refined and economical but also quick when the mood takes you. 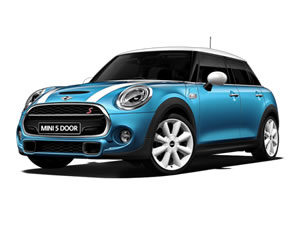 Much has been made of this first ever 5 door MINI and in truth this is the first time a MINI can be properly compared to a 5 door VW Golf, Audi A3, Ford Focus or Vauxhall Astra.  That said it is smaller than any of these competitors – the clue is in the name.

Despite the increased size, it’s still recognisably MINI with a familiar shape to the grille, headlights, ‘floating roof’ and rear lights – although those are much wider than previous versions.

The engine and gearbox lineup is identical to the Clubman above. 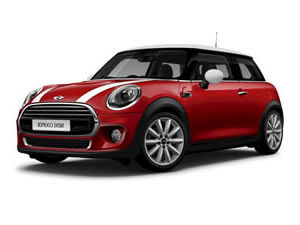 The three door MINI is perhaps the cornerstone of the range – whilst many people want this little car because of its iconic shape an looks they often buy a larger version that echos this model.

In every way this is a modern incarnation of the original 1959 MINI – though it probably won’t break down, has creature comforts like power steering, aircon and bluetooth and you won’t feel like you have travelled in an egg whisk after a 200 mile journey.  So actually it’s not like the original at all – except it looks similar.

Maybe that’s a little unfair.  In 1.5 petrol or diesel form this is a superb city car, nippy, easy to park and fun to drive – furthermore it is very capable on the motorway.

The 2.0 litre will thrill you when you want speed and in diesel form will impress you at the pumps as well as your annual road tax bill of only £30 per year.

In Cooper S and John Cooper Works forms you will have all the thrills you can handle – right up to the point where you lose your driving licence.

No small car line up would be complete without a convertible and the MINI is no exception.

A convertible is not really an entry level car and so this model is only available in Cooper, Cooper S, Cooper S and the high performance John Cooper Works engine options.

As a convertible this car is the real deal – some competitors try and compete with what is really a large sunroof – but don’t be fooled into thinking this is a 4 seater – unless some of the passengers are smaller than average that is. 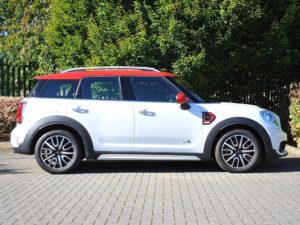 When is a MINI not a MINI?  Perhaps when it’s Countryman.  The ‘MINI’ countryman is a good car – but mini it is not.  The new Countryman has grown 200 mm in length as well as being taller and wider than its predecessor – which was not really very ‘mini’ either.

That said it is a decent family car.  The loadspace volume is some 100 litres larger than before and includes a Range Rover -esk ‘picnic bench’ which folds out to provide a padded cushion to sit on when removing your wellies.

As in the other third generation cars all engines are all turbo charged and in petrol form include a 1.5 litre, 136 bhp, three-cylinder and a Cooper S 2.0-litre, 192hp turbocharged four cylinder petrol.  In diesel form a 2.0 litre unit with 147 bhp in standard guise and a 190 bhp SD.

There’s also MINI’s first ever plug-in hybrid model, the ‘Cooper S E Countryman ALL4’, which combines the 1.5-litre petrol engine and electric motor power to deliver range-topping performance of 0-62mph in 6.8 seconds, while apparently achieving 134.5 mpg (which is a con). Why?  Because like many hybrids the car can complete the EURO regulated fuel consumption tests on a fully charged battery using almost no petrol.  In the real world expect mid 40s average mpg if you are careful.  On long motorway journeys however you simply have a heavy 1.5 litre petrol when compared to the non-hybrid versions.  This then is a good car to cheat the congestion charge whilst actually not reducing emissions in any real sense.  On the other hand having electric as well as petrol power makes this the ‘sensible’ performance car of the Countryman range.

Hybrids are improving but are still only good in paper – in the real world if you want economy then diesels are still your the best option (until we improve battery technology at least) and with these modern diesel engines cars achieving EURO6 compliance they are as clean as an internal combustion engine can be.