For the second generation of MINI, BMW knew they had a winning formula.  They had created a new sector and want to ensure they stayed at the top.  So whilst keeping the iconic MINI shape BMW wanted to up their game in economy, performance and safety.  One might argue that they rested on their laurels  with the first generation by not using the time to build a new drive train.  Time to partner again.

Introduced in 2007 the totally re-engineered MINI shared no components with its predecessor.  Engine wise BMW partnered with Groupe PSA (the owners of Peugeot and Citroën) to produce power plants.  In petrol guise these are known as the ‘Prince’ engine and are in fact a successor of the Rover 214i engine of the 1980s.  As for the diesels – the MINI range of this era shares its power plants with many Fords, Peugeot, Citroëns and Volvo’s being a high efficiency 4 cylinder turbo diesel in either 90BHP or 110 BHP guise  – at least until the facelift in 2010 onwards when BMW started to use their own diesel engines (see below)..

This time around BMW vastly increased the range of available models, each available with petrol, petrol turbo and diesel turbo engines. 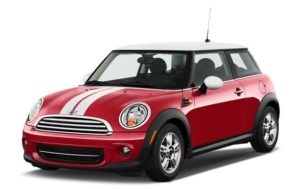 The most common of the second generation shapes – the 3 door hatchback; the iconic MINI shape.  This model ran from 2007 to 2013 and as of August 2010 onwards had a ‘mid-life’ facelift with a number of under-the-skin changes – mainly they started using BMW sourced engines for the diesel cars.  This facelife was know as LCI  (life cycle Impulse) so you may hear the terms ‘pre LCI’ and ‘Post LCI’.

The R56 hatchback was available in all trims:

Launched in 2009, a budget lower powered (75 bhp) petrol with the aim of attracting lower insurance premiums mainly for younger or inexperienced drivers.

Mostly these cars had very few frills – i.e. no alloys or aircon in most cases.  That said I have seen some highly spec’d Firsts – one with leather, 17 inch wheels and a John Cooper Works body kit so they are around.

A low insurance model with a 95 bhp 1.4 petrol engine or 1.6 petrol with 98bhp.  A diesel ‘One D’ came with a detuned 90bhp motor, down from 110bhp in the standard ‘Cooper’.   It is entirely possibly to have a MINI One with big wheels and body kits and lots of toys – but with a lower power engine.  For most model years the ‘Salt’ pack was included with the One and depending on which model year made a big difference to the included kit – for example AirCon was not standard until 2009.

The Pepper Pack as standard – but as always what you got in this pack depended on the model year.

For most model years the Cooper S came with the Chili pack as standard, as did bigger wheels and so on.  This model was the turbo charged 1.6 petrol engine producing 175 BHP.  This engines uses a new twin scroll turbocharger and in the interests of efficiency, and has  direct injection; consequently, this engine version does not have Valvetronic. This engine also has an “overboost” function which temporarily raises the torque 15 lbf⋅ft under hard acceleration. As a result 0-60 mph is reached in 6.7 seconds) and top speed is 140 mph.

These cars high spec, high powered cars had  1.6-litre petrol twin-scroll turbocharged engine that produces 208 hp at 6,000 rpm, along with 193 lb⋅ft of torque. Acceleration from 0-60 mph is claimed at 6.1 seconds. 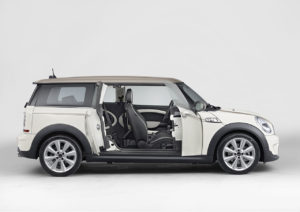 Produced from 2008 to 2014 the MINI Clubman was available in Cooper, Cooper S, John Cooper Works and Cooper D trims.

Identical to the 3-door hatchback from the B-pillar forward, the Clubman features a length increased by 240 mm, an 80 mm longer wheelbase, increased rear-seat leg room and cargo space deeper by 160 mm providing an increased 260 litres of space. 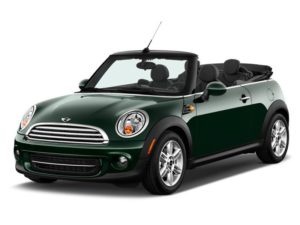 The second generation model follows in the same footsteps as the R52 but with some key improvements mostly shared with the rest of the second gen MINI – although with the convertible there were many improvements to the cars rigidity, refinement and hood mechanisms.  Initially launched in petrol guise only (1.6 Cooper and Cooper S) a Cooper D model followed in 2010 along with the One trim.

The Coupé which went on sale in the UK from 1 October 2011 is based on the MINI Convertible, but with only two seats allowing a bigger boot of 280 litres  The Coupé’s windscreen is angled rearwards by 13 degrees more than in the cabrio’s and the roof is 29 mm (1.1 inches) lower than standard MINI Hatch. The rear spoiler rises at speeds above 50 mph.

The range of the Coupé follows a similar pattern to other MINI models; featuring Cooper, Cooper S, Cooper SD and the range-topping John Cooper Works (JCW). The JCW version accelerates from 0 to 62 mph in 6.4 seconds and a top speed of 149 mph thanks to a turbocharged 208 bhp 1,598 cc four-cylinder.

The Cooper SD is a 2.0 litre turbo diesel producing 141 bhp are equipped with a six-speed manual gearbox with the option of automatic on all but the JCW. 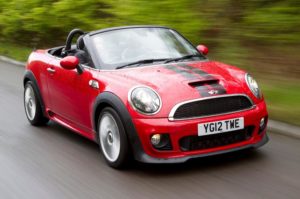 The MINI Roadster is the convertible version of the Coupé.

The range of models and engines mirrors the MINI Coupé with a range of 1.6 L petrol engines in various levels of power and a 2.0 L diesel engine .

Having 2 convertibles in the range may lead to confusion- but this one is a pure 2 seater whereas the other one pretends to be a 4 seater.  So this, like the Coupé  is more of a drivers car than a passenger one.

Engines and trim are the same as the Coupé  with Cooper, Cooper S, Cooper SD and the range-topping John Cooper Works (JCW) 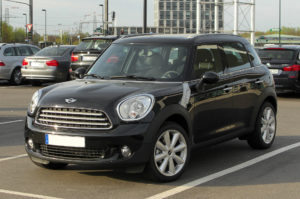 The Countryman went on sale in the UK on 18 September 2010 and is MINIs first five-door crossover.  It opened MINI ownership to people with 2.4 children and a dog.

All of the petrol engine used in the MINI Countryman are 1.6-litre units and come in 98, 122 and turbocharged 184bhp forms. The turbo engine belongs to the Cooper S model and covers off 0-62mph in just 7.6 seconds in front-wheel drive, manual gearbox form.  The John Cooper Works model arrived in September 2012 and has a 218bhp version of the Cooper S’s 1.6-litre petrol turbo engine to deliver 0-62mph in 7.0 seconds and a top speed of 140mph so if your 2.4 children aren’t sick then your dog certainly will be.

The MINI Countryman One D has a 1.6-litre, 90bhp turbodiesel engine that drives the front wheels.

To top the range there is an  ALL4 all-wheel-drive variant for those who want a matchbox Range Rover. 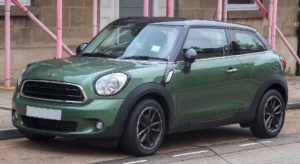 The MINI Paceman has to be the oddest cross-over since the motorised pogostick.

Someone in design must have been really desperate to find a niche in the car market that hadn’t yet been filled.  I know – he/she must have said – lets make a car that looks like an off-roader but isnt, looks like a MINI but isn’t and looks like it is a family car but, well, isn’t.

DONE said management – let’s call it the Paceman to make it sound like a sleek, sexy racer – which it isn’t.

SO – it’s a Coupé version of the Countryman.  But why?