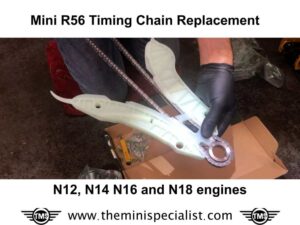 What is a Timing Chain and why does it need replacing?

Mini Cooper timing chain noise repair: the engine’s timing chain keeps the movement of the components in the top half of an engine in synchronisation with those in the bottom half.

In the top part of the engine, the timing chain is attached to the camshafts – in a Mini there are 2 camshafts each with numerous lobes along its length.  As the camshaft spins, these lobes open and close the valves in the cylinder head to let fuel and air into the combustion chamber at the right time.  The valves also allow exhaust gases to exit once the fuel and air have been compressed and ignited.

At the bottom end of the engine, the timing chain is also attached to the crankshaft, which rotates and raises and lowers the pistons at the perfect time to compress the fuel and air prior to ignition.

Chain tensioner failure is a common problem for the Generation 2 MINI R56 Cooper S, it is characterised by a loud rattle that is particularly prominent from startup/cold. The issue affects the N14 engine found in the MINI R56 Cooper S between 2007 and 2009, and JCW’s from 2008-2012. The issue is often referred to as death rattle. The issue was supposed to be resolved with the introduction of the N18 engine in the later MINI Cooper S/JCW/GP models – although N18 engines still have their problems.

The chain tensioner is inherently weak and has had several revisions from BMW over the years. A weak tensioner can cause your MINI to develop the dreaded cold start (death) rattle. This is where the chain is not under the correct amount of tension and is free to rattle around against the plastic chain guides. The noise can be reminiscent of a diesel tractor on startup and does not sound particularly healthy.

The reason the noise is most audible on cold start is that the oil has not yet circulated around the engine. Once engine oil pressure has built up and the oil has had a chance to circulate the engine, the oil acts as a damper and reduces the level of audible noise.

If your MINI has recently developed death rattle then the initial fix is to carry out an oil and filter change along with the latest tensioner from BMW. If this does not appear to fix the issue then the next step is to replace the chain and the guides. The reason for this is that over time, due to the lack of tension, the chain stretches meaning that even when under the correct amount of tension, the cold start rattle can still be heard.

Mini Cooper timing chain noise repair – the following video takes you through what is involved.

Lost your password?
| Back to Login
Call Now
Directions
We use cookies to ensure that we give you the best experience on our website. If you continue to use this site we will assume that you are happy with it.Okrefuse third party non-functional cookies.Privacy policy